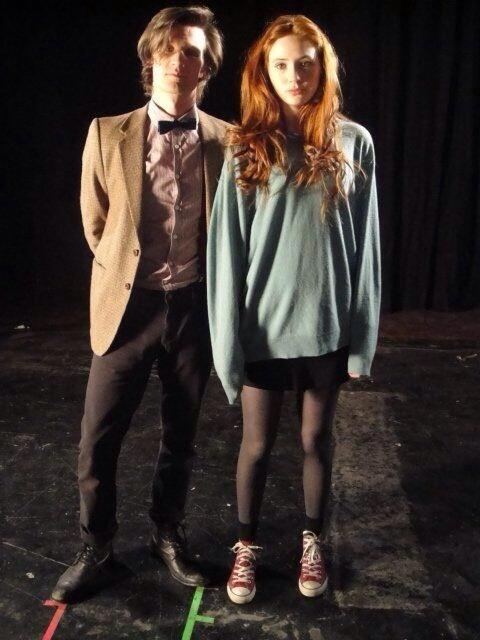 The original test photo of Smith and Gillan in costume as The Doctor and Amelia Pond.

Well its happened, the clock has struck twelve, Silence fell and the time of the Eleventh is over. The Time of the Doctor may not have been what all Doctor Who fans hoped for, but I feel it was fitting end to Matt Smith’s time as the renegade Time Lord. There were a lot of loose ends that needed to be tied up and Steven Moffat did it beautifully.

Going into the 2013 Christmas special, Steven Moffat had a lot to do, such as figuring out how the Doctor ended up on Trenzalore, why “silence will fall,” and how to get around those pesky regeneration restrictions. It’s like Moffat enjoys creating problems just so he can to solve them later. Some may think that Moffat created a simple solutions to all these questions but his method was actually quite clever, and it cleans the slate rather nicely for Peter Capaldi to step into the Doctor’s shoes.

Here is a list of all the loose ends that were wrapped up in The Time of the Doctor:

As the 50th anniversary draws clower there have been many theories concerning the overall story. One of the biggest mysteries yet to be revealed is what exactly did John Hurt’s Doctor do that was so horrible that he lost his title of “The Doctor”. Well, lets look at a few hints from previous episodes and see what we can come up with.

In the episode The Beast Below, the 11th Doctor mentions that he would have to change his name after killing the star whale because he would no longer be a Doctor. So it’s probaby safe to assume that death was involved (genocide?). In the episode The Doctor’s Wife, the Doctor admits he was responsible for the destruction of the Time Lords. One possible theory is that The Doctor did in fact kill all of the Time Lords but at a specific point in time. The time was (maybe) after the end of the largest Time Lord victory during the war at The Gates of Elysium.

Here’s the theory: after the battle at The Gates of Elysium, Davros had fallen, the Daleks were driven off Gallifrey by the Time Lords, and they were all but victorious. However, this victory wasn’t enough for the now power hungry Time Lords. They wanted to erase every last Dalek out of existence. A new offensive was led by the Time Lords and a second Great Time War began. Knowing the Time Lords had to be stopped, the Doctor took it upon himself to end this Second Time War before it started. He tells the Time Lords that he is finished fighting and walks away from the war effort. He leaves the Time War and the Time Lords to start building “The Moment”

The Doctor returns some time later and uses “The Moment” to destroy all of the Time Lords (much like the Immortality Gate in ‘The End of Time’) and converts all of them into regeneration energy which is absorbed by The Doctor (John Hurt) giving him billions of regeneration opportunities. Then using the power of all the Time Lords, the Doctor “time locks” the events of the first Time War so that the war mongering will cease.

I believe that the crimes of John Hurt’s Doctor was the desctruction of a billion Time Lord lives. This does away with his regeneration limit and also explains why there aren’t any Time Lords left after the Time War except those left locked during war time. Its possible he put them in an infinite loop of fighting the same battles with the same outcomes, always ending on the day of their demise and beginning again on the day the Daleks first invaded. This is after all just a theory…

Head writer Steven Moffat has made another bold pubic statement saying that the The Day of the Doctor will change the course of Doctor Who as we know it.

During an interview with SFX (#241, out today), Moffat says:

“We’ve got to set the Doctor off in a brand new direction. It’s chapter two of his life. Now something happens to him that changes the way he thinks and the way he will adventure from now on. You can celebrate an anniversary in many ways – I think the most productive one within the narrative is to say “This is where the story really starts. This is where he finds his mission, he finds his destiny.”

Moffat also discussed the dynamic between the three [known] Doctors featured in the 50th:

“I wrote it as the friction version. When you’re talking to yourself there are no limitations, there’s no holding back. You wouldn’t be kind or courteous. At the same time, because they are two loveable, madcap, caffeinated Doctors, they’re also quite fanboyish about each other. They think it’s quite cool. They’re not broody, upset Doctors – it’s more “There’s two of us! Brilliant!” But that’s mostly in the playing, because they were having such a good time together that they brought that out. They get giggly with each other. It is, by lovely accident, a tremendous double-act. They’re naturally funny together. Enough alike and enough dissimilar. Matt said it was like Laurel and Laurel, as if Hardy didn’t show up – except he does in the form of John Hurt!”

“The weird thing is there’s never that much contrast between Doctors. The truth is it’s not wildly different how they’re written. I’ve written quite a lot for both of them, and you just have the voice in your head, very clearly. Where they are similar is funny, because they’re practically in unison, and where they are different is David is a cheeky, sexy, genuinely cool Doctor, up against a Doctor who thinks he’s sexy and cool but is woefully wrong on that subject! And that’s just naturally funny.”

Here are six high quality pictures from the 50th Anniversary special, The Day of the Doctor. These images feature Matt Smith, David Tennant, John Hurt, Jenna Coleman and Jemma Redgrave. These pictures had been released earlier but these are much better quality than before.

A few pictures have been released for the 50th Annniversary from the SFX magazine (out Wednesday 16 October), featuring Matt Smith, David Tennant, John Hurt, Clara and Kate.

Eleventh Doctor Matt Smith just finished filming for the Doctor Who 2013 Christmas Special this past Saturday, and he has already moved on to his next role in which he will star as psychotic Wall Street Banker Patrick Bateman in American Psycho The Musical.

Yes, I was just as surprised as you when I found out.

According to the Daily Mail, Smith is about to start rehearsals on the musical of Bret Easton Ellis’s novel American Psycho, a story that tells a tale of overwhelming yuppie refinement and taste (particularly the music of Phil Collins, Huey Lewis and the News and Whitney Houston) with gruesome murder and the true emptiness of a serial killer’s heart.

Smith will play the lead that Christian Bale portrayed in the movie adaptation back in 2000. This version will be slightly, with Smith singing a few melodies and busting a move too, which will surely be worth the price of a ticket alone.

The show’s production is projected to start on December 12 at London’s Almeida Theatre, moving over to the West End, and possibly Broadway, if the show takes off.

A source close to the shows producers has said “It’s a damn difficult role to pull off and Smith has charm and the acting chops to do it.”

Alex Kingston appears to have teased fans once more about an appearance from River Song.

Speaking in a video with BBC America, she said: “I look forward to sharing more of [River] with you in the future, but… spoilers!”

Rumours have circulated that River will appear once more in Matt Smith’s final episode during the Christmas special, although there is the possibility that her character also carry over to Peter Capaldi’s series? With Moffat still in charge it most certainly is not out of the question.

Matt Smith completed filiming for the 2013 Doctor Who Christmas special on Saturday, October 5th. This of course means that he The Doctor has finally regenerated into his twelvth form which will be played by Peter Capaldi.

Show producer Marcus Wilson confirmed via Twitter that filming had wrapped on this year’s Christmas Special on Saturday:

“That’s a wrap! Christmas is in the can, you lucky lucky people!!!”

Smith mother Lynne posted this picture of her and her son via twitter:

The next series of Doctor Who will begin to air in January of next year, with Jenna Coleman returning to film Series 8 for an autumn 2014 broadcast. But for now, sad Doctor gifs all around: